Learn the American-English Accent | 8 Hours of Audio Instruction for Reducing Accents of all other First Languages.

The program contains a text manual and 8 hours of systematic audio lessons. It is specifically for speakers of other first languages wanting to reduce foreign-language accents and learn the American (non-regional) accent. A VIDEO SUPPLEMENT & TEACHER’S MANUAL are also available separately or in a discounted package.

David’s method to reduce foreign-language accents does not start with imitation or pronunciation drills. This fun and effective approach is based on his accent-learning techniques for actors. It teaches the voice placement, intonation/inflections, and then target pronunciations of the General American accent.

REDUCING FOREIGN-LANGUAGE ACCENTS:
WHAT WILL YOU LEARN?

IS THERE ONE STANDARD, GENERAL (NON-REGIONAL) AMERICAN ACCENT?

I define the “Non-Regional American Accent” as oral English that identifies its speakers as native-born Americans. But, at the same time, it does not give most listeners clues that speakers are from specific cities or regions. I don’t believe, however, that there is one absolute standard for “a correct non-regional accent.” Some vowel pronunciations can vary a bit without creating the impression of an accent change. The intonation and voice placement remain the same in the different versions of “non-regional” American. 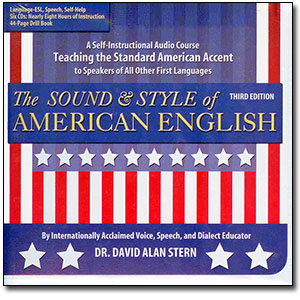