ACTING WITH AN ACCENT–Kennedy Family

The download to learn the Kennedy-Family Accent contains sixty-one (61) minutes of systematic instruction in MP3 sound files. You’ll also get a printable PDF of the instruction manual. It contains summaries of the audio lessons and full transcripts of the drill words, phrases, and passages.

You’ll learn the speech pattern or idiolect typically associated with the Kennedy family, particularly President John F. Kennedy and his siblings. Here’s a brief summary of the training.

MORE ABOUT THE KENNEDY-ESQUE ACCENT

Some linguists would classify this speech pattern as an “idiolect” (rather than an accent or dialect) since it is most associated with a few specific people. It has many of the same features as the classic Boston accent. But the speech of JFK and his siblings was affected by their time spent in New York State. It also developed various idiosyncrasies of rhythm and stress that were reinforced within the family over the years. Among the differences from Boston speech are the pronunciations of two sounds. There’s a rounded vowel in THOUGHT, but there’s an unrounded vowel in LOT. This is the opposite of most Boston speakers, but similar to the pronunciation in NYC and Providence, Rhode Island. 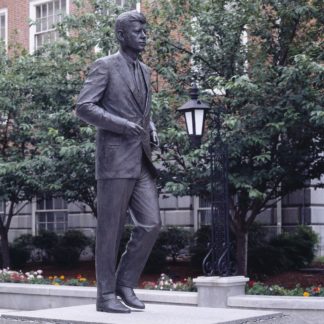 You're viewing: ACTING WITH AN ACCENT–Kennedy Family $15.95
Add to cart
Dialect Accent Specialists