Theis download to learn the Scottish Accent contains seventy-nine (79) minutes of systematic instruction in MP3 sound files. You’ll also get a printable PDF of the instruction manual. It contains summaries of the audio lessons and full transcripts of the drill words, phrases, and passages.

You’ll first learn a general Scottish accent. You’ll then learn to modify the style and intensity of the accent.

MORE ABOUT THE SCOTTISH ACCENT

Similar to the linguistic situation in Ireland, Scotland’s primary language used to be Gaelic, albeit the Scottish dialect of the language. Over the years, as part of the United Kingdom, English with different intensities of the Scottish accent become more dominant. As is also the case in Ireland, the number of Gaelic speakers has been increasing in recent decades. This has accompanied the growing nationalist movement and political attempts to secede from the UK.

Most of today’s English speakers are somewhat familiar with at least the general sound of Scottish speech. Many actors and TV personalities nowadays use it when interviewed (or interviewing). Among the many native-speaking Scottish actors are Sean Connery, Billy Connolly, Ewan McGregor, and Karen Gillan. Talk show host Craig Fergusson also has Scottish speech. TV watchers from the ’60s and beyond heard the accent from Star Trek character Scotty, played by versatile dialect-actor James Doohan. 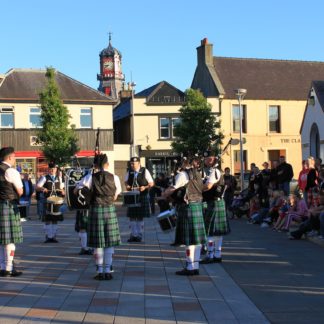 You're viewing: ACTING WITH AN ACCENT–Scottish $15.95
Add to cart
Dialect Accent Specialists