This program in David Alan Stern’s Acting with an Accent series teaches several styles and intensities of the Yiddish accent common years ago with English-speaking Jews raised in Eastern European shetls.

The download contains sixty-two (62) minutes of systematic instruction in MP3 sound files. You’ll also get a printable PDF of the instruction manual. It contains summaries of the audio lessons and full transcripts of the drill words, phrases, and passages.

You will learn the lilt/inflections, resonance (voice placement), and unique pronunciations of several styles and intensities of Eastern European Yiddish accent. Here’s a brief summary of the training.

MORE ABOUT THE YIDDISH ACCENT

Many actors and directors have major misconceptions about the origins of a Yiddish accent and who would speak with one. One common erroneous belief is that all New York Jewish characters should sound like Yiddish speakers. Another is that native-born Israelis would sound Yiddish. Let’s start with a few definitions: 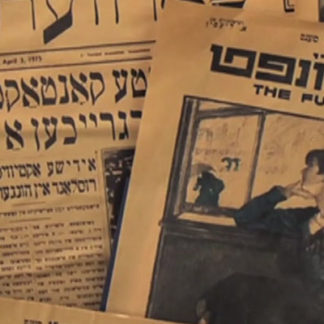 You're viewing: ACTING WITH AN ACCENT–Yiddish $15.95
Add to cart
Dialect Accent Specialists