This 60-minute  download is the video companion to our Sound & Style audio program for reducing foreign-language accents.

This 60-minute foreign accent-reduction video is the companion to The SOUND & STYLE of AMERICAN ENGLISH audios. It’s part of the complete program for Learning a General American sound. It provides visual help in learning the two important non-pronunciation traits of the General American accent.

HISTORY OF THIS ACCENT-REDUCTION VIDEO

We began selling downloads of our audio products in 2017. Since then, many ESL and speech trainers have asked if they could still get our old accent-reduction video. Its original publisher, Video Language Products, recently ceased operation and sold us back the rights. We have now converted it to a downloadable MP4 video and made it available through the website. It’s nostalgic to see myself with much more hair and younger-looking skin. Yes, we shot the video back in my Hollywood-coaching days. However, our customers have convinced us that the added video feature has helped many teachers and students to master the basics of our accent-reduction method. So here it is again.

IS THERE ONE STANDARD AMERICAN ACCENT?

I define the “Non-Regional American Accent” as oral English that identifies its speakers as native-born Americans. But, at the same time, it does not give most listeners clues that speakers are from specific cities or regions. I don’t believe, however, that there is one absolute standard for “a correct non-regional accent.” Some vowel pronunciations can vary a bit without creating the impression of an accent change. The intonation and voice placement remain the same in the different versions of “non-regional” American. 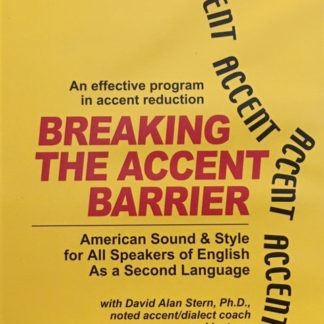